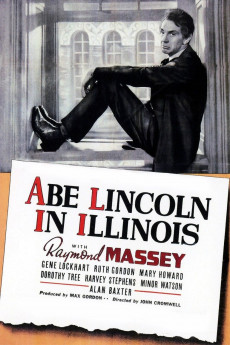 Howard Da Silva, Raymond Massey, Ruth Gordon, Edward Van Sloan
Biopic of Abe Lincoln, 16th President of the United States, from his early days in backwoods Kentucky to his election as President. After a time running livestock to New Orleans, he settles in New Salem where he meets and falls in love with Ann Rutledge who is already engaged to someone. Abe makes a home for himself in New Salem, eventually running a store and becoming the postmaster. He's popular with the locals and is eventually elected to the State legislature but afterward established himself in the practice of law. He eventually meets Mary Todd who would become his wife and and is sent to Washington as a Congressman before he is elected president.