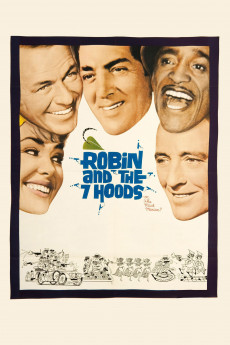 Peter Falk, Victor Buono, Frank Sinatra, Dean Martin
In Prohibition-era Chicago, the murder of mob boss Big Jim Stevens leaves a vacuum at the top. As the murder was orchestrated by Gisborne - one of Big Jim's underlings - with the assistance of Sheriff Glick and Deputy Sheriff Potts, who were also in Big Jim's back pocket, Gisborne plans to take over. However, Big Jim would have wanted Robbo, who he treated like a son, to take over. As such, a gangland war ensues, with Robbo having among his men an Indiana pool hustler named Little John, and Will, a sharp shooter. What happens between the two gangs is affected by Marian Stevens, Big Jim's beautiful and sophisticated daughter, who inherited her father's ambition and has more criminal smarts than her father. Among Marian's wants is for her father's murder to be avenged. Marian's intervention into the matter leads to Robbo and his band of merry men gaining some legitimacy within the Chicago public mindset, he giving some of his profits and the profits of others to the less fortunate. But Marian may have a bigger influence on the outcome of the war as she works toward her own end manipulating whichever man she can using her feminine wiles.