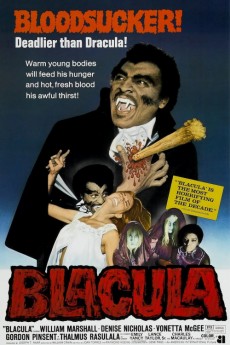 Vonetta McGee, Elisha Cook Jr., Gordon Pinsent, Denise Nicholas
An 18th century African statesman is transformed into a vampire, cursed with the name Blacula, and entombed in Dracula's Castle after he fails to convince the Count to support him in his cause to end the slave trade. Two hundred years later, a pair of interior decorators transport his coffin to L.A. where he awakes with an unquenchable thirst for human blood. As Blacula pursues a woman who resembles his long dead wife, her brother-in-law, a pathologist, investigates the string of carnage that follows in the vampire's wake. —Molly Rose Steed