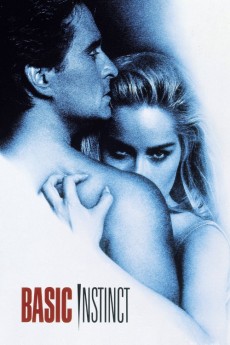 Sharon Stone, Jeanne Tripplehorn, Michael Douglas, Wayne Knight
Nick Curran is in charge of the investigation of a brutal murder of a rock star, who has been killed using an ice pick. All the evidence points to a beautiful woman, Catherine, as the main suspect of the crime. Catherine is a psychologist and she's written one crime novel, a story in which a similar crime is described. Curran goes to Catherine's house to interrogate her about the victim and what happened that night. Apparently, Catherine was a formal lover of the musician and she even spent that night with him, but she claims to have not killed him. Nick feels attracted immediately to Catherine, but she's a quite intelligent woman who manages to avoid his questions cleverly, using her physical attributes and seductive personality. Catherine has a romantic relationship with another woman, but that won't be an obstacle for Nick, who everyday seems to be much more interested in her. But Nick's been checked by a psychologist, Beth, who was his girlfriend in the past, because the detective had an alcohol problem. But the sexual attraction that Nick feels for Catherine, seems to provoke the problem again. Nick becomes Catherine's lover, a fact that threatens to hinder the investigation and puts in danger his life, discovering a wild sexuality never experimented before. Nick's convinced that Catherine is innocent, but maybe love and sex are blinding him in his way of unfolding the truth.