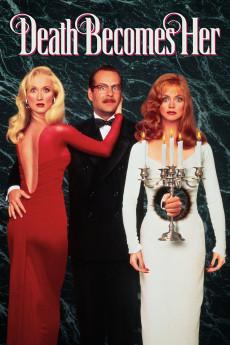 Bruce Willis, Meryl Streep, Goldie Hawn, Isabella Rossellini
Death Becomes Her is a story of sabotage and betrayal. Madeline Ashton (Meryl Streep) and Helen Sharp (Goldie Hawn) have acted as toxic friends in one another's lives since childhood. Helen Sharp met and married plastic surgeon Ernest Menville (Bruce Willis), thinking her dreams of a happy life had been fulfilled. Madeline's malicious and competitive spirit becomes apparent when she purposefully breaks apart the marriage and subsequently marries Ernest herself. This tragedy sends Helen into a downward spiral, eventually landing her in a mental institution. Meanwhile, the marriage between Ernest and Madeline becomes more and more miserable as it becomes apparent that Madeline has never even liked him and will never love him. Madeline's misery is manifested into an adulterous affair and thousands of dollars spent on cosmetic surgery. She longs to be young and single again, while resentment grows toward her husband. Madeline is tempted into taking a potion, one that will stop the aging process and send it into reverse. She will soon be at her utmost physical perfection, a state she has missed and longed for for years. Her newly regained youth gives her confidence beyond expectation and she decides to pay a visit to her old friend Helen. She assumes that Helen is still overweight, after gaining weight in the mental institution, but finds her to be younger looking and fitter than ever. The old, long dead competition between the two women is reignited. Both want Ernest and will stop at no cost to have him. The competition becomes presumable deadly, until it is apparent that Helen has taken the same potion. This long time rivalry takes them both to very unexpected places.