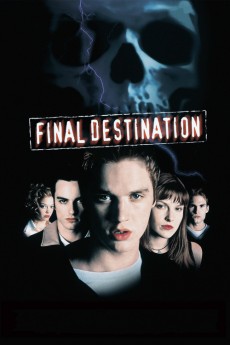 Ali Larter, Seann William Scott, Devon Sawa, Daniel Roebuck
Death doesn't take no for an answer. Death is coming. And Alex Browning is cursed with knowing when, how and where the grim reaper will take his next victim to the Final Destination. After boarding a plane to Europe with his fellow French club members, high school student Alex Browning (Devon Sawa) has a premonition of the aircraft exploding moments after takeoff, killing every on board. Alex panics, insisting that everyone get off the plane. In the melee than ensues, seven people, including Alex, are forced to disembark--saving them from a fiery death when the plan explodes as Alex foresaw. But as, one by one, each of these seven who cheated fate meets an untimely end, Alex and his remaining friends band together to try change destiny and outwit the untamable forces of death.