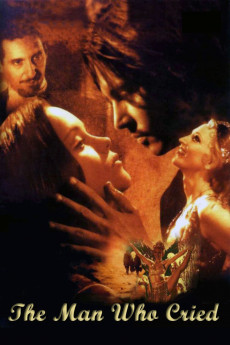 Johnny Depp, Cate Blanchett, Christina Ricci, John Turturro
In this historical drama with music, a gifted singer (Oleg Yankovsky) from a Jewish village in Russia travels to the United States in 1927, leaving behind his young daughter Fegele (Claudia Lander-Duke). Father has promised his family that he'll send for Fegele as soon as he can, but authorities make life hard for the Jewish population, and Fegele is forced to flee with relatives to England. Fegele is adopted by a British family, which renames her Suzie and raises her with little acknowledgment of her ethnic heritage. As she grows to adulthood, Suzie (Christina Ricci) becomes a gifted vocalist and gets a job singing in a nigh club revue in Paris. Before she leaves England, her adopted family presents Suzie with a picture of her father, still believed to be living in America, and she decides she will go to the United States some day and find him. In Paris, Suzie makes friends with Lola (Cate Blanchett), a Russian showgirl in the market for a rich husband. Lola becomes involved with opera star Dante Dominio (John Turturro), and soon both Lola and Suzie are extras in Dominio's company, managed by Felix Perlman (Harry Dean Stanton). As Lola takes up with Dante, Suzie falls for Cesar (Johnny Depp), a poor but handsome gypsy horse trainer. Suzie soon becomes involved with the handsome Cesar, but their happiness proves to be short-lived when the Nazi war machine begins to roll through France.