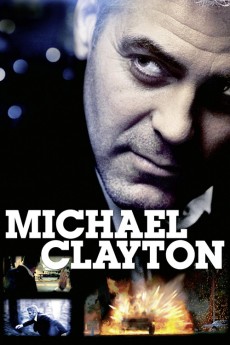 Katherine Waterston, Tilda Swinton, George Clooney, Julie White
Forty-five year old divorced father Michael Clayton, formerly a respected litigator, has long been the "fixer" for New York law firm Kenner, Bach, and Ledeen. Likening his work to that of a janitor, he cleans up the messes of the firm's clients as well as that of the firm itself. He knows that he cannot do this job forever, especially as he is getting burnt out and as the firm is going through a merger, he not having an official job title describing what he does to the other firm. As a fall-back, he had gone through the process to open a bar with his brother Timmy, but is now $80,000 in debt to a loan shark as Timmy, a drug addict who has since gone into hiding, used their money to fuel his drug habit. Despite being the best at his job, Michael seems unable to fix his own personal problem. The latest issue he faces at work concerns Arthur Edens, the senior and best litigator in the firm. A manic-depressive whose condition is largely managed by medication, Arthur has been working solely on a case for U-North, an agro-conglomerate, for the past six years. It is a $3 billion class action lawsuit against U-North. Arthur largely works with Karen Crowder, U-North's general counsel, she a woman who highly controls what others see of her. The issue is that Arthur, off his meds and in a manic state, starts to strip naked while in a deposition meeting in Milwaukee. Beyond needing to fix the problem that Arthur has created, Michael has to figure out if his rantings were that of a madman, or if there was some other end to which Arthur is working. In his dealings with Arthur, with the highers up at the firm, and indirectly with U-North and Karen, Michael may come to some understandings about what is fully going-on, but not without some further risk to his own livelihood as well as his life.