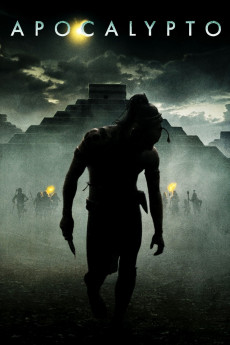 Raoul Trujillo, Rudy Youngblood, Gerardo Taracena
A Mayan forest village lives happily and harmoniously, except the mean teasing of Blunted's inability to sire. When terrified refugees pass, the chief forbids the hunting party to 'spead fear', but the real cause soon follows. Their own community is pillaged, the survivors cruelly enslaved and dragged away. The chief's proud son Jaguar Paw manages to hide his pregnant wife and toddler son, but in an unsafe place. The men are destined for bloody sacrifice to the gods in the raider kingdom's pestilence-stricken capital. An 'auspicious' solar eclipse renders their number superfluous, but the raiders' captain orders them killed as target practice. Jaguar Paw survives, killing the captain's son, and may now incarnate an apocalyptic prophecy or still perish without saving his family, while another danger looms unseen.