After Truth: Disinformation and the Cost of Fake News (2020) 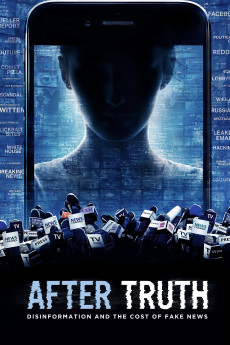 The proliferation of disinformation, what may be construed in some circles as what was often called "fake news" (before President Donald Trump hijacked the phrase to describe anything said negatively about him), is discussed, specifically from 2015 to present day, and especially within an American political context. Such disinformation has become more easily spread with technology where almost anybody with a computer, Internet access, and know how can have a platform, more often than not without oversight. The disinformation is usually borne out of a sense of opposition usually by the alt right, and knowledge that what is being perpetrated is indeed not the truth. Methods to spread the disinformation, especially through social media platforms as a start which often then move to specific cable news outlets who "purport" to tell the truth, are discussed, especially in that most of these platforms were designed by their largely young, white, male creators without the aforementioned want for oversight, that is until such disinformation touches them profoundly and personally which is rarely the case. A few high profile political disinformation campaigns are presented and the effect they had on the innocent - sometimes those who are marginalized in some way or another to begin with - who are deemed by those behind the campaigns as necessary collateral damage. And some of the more well known American perpetrators of disinformation are profiled. The ultimate question becomes how society in general can combat disinformation, and if truth in and of itself will win the day in the end as many purists hope. —Huggo