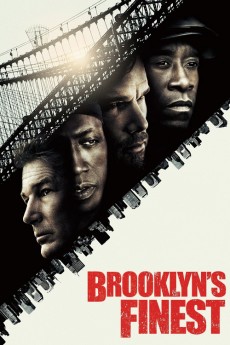 Ethan Hawke, Vincent D'Onofrio, Will Patton, Ellen Barkin
Not knowing each other except perhaps by face, Eddie Dugan, Sal Procida and Clarence Butler work for the NYPD based out of the 65th Precinct in Brooklyn. Facing imminent retirement, Eddie, a beat cop, long ago became disillusioned with the job, it being nothing as he had hoped when he was a rookie. As such, he has led what what is considered an unremarkable career, with most of his fellow officers viewing him with derision. He has no friends, with his only emotional human connection being to Chantal, a prostitute he frequents. Solely because of he being senior man, he, in his last week of work, is assigned to a new program, where he is to take out rookie officers on patrol to acclimatize them to the job. This assignment may not lead to the outcome the program administrators had hoped due to his overall view of police work. Sal, a narc, is facing problems at home: he and his wife Angela live in a small and thus overcrowded house with their four children with another two on the way, with the house itself having mold problems which is negatively affecting Angela's pregnancy. On his primary focus of buying a bigger, mold-free house, Sal, who is facing an imminent deadline for a suitable house without the money for the down payment, has been pilfering money from drug raids, he not averse to shooting to kill to obtain those moneys without detection by his fellow narcs. Clarence has been deep undercover for two years in the drug squad, he known on the street as a dealer named Tango. He wants out of undercover work as this job has led to the dissolution of his marriage, and as he feels increasing empathy for his drug dealer associates, especially as he has seen police corruption in the way that they deal with the drug issue. His handler, Lieutenant Bill Hobarts, under the direction of ambitious federal Agent Smith, lets Clarence write his own ticket out of UC if he helps give up fellow dealer, Casanova Phillips, who "Tango" considers a true friend, especially as Cas once saved his life. As the three officers deal with their respective issues, their professional lives intersect, their encounters which will fundamentally alter their individual life course.