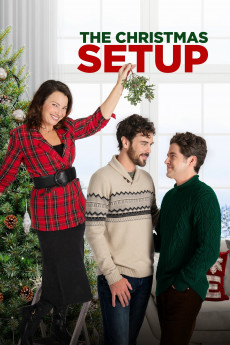 Fran Drescher, Ellen Wong, Chad Connell, Ben Lewis
Just before he and Madelyn McKay, his BFF since college freshman year, are to head off to Milwaukee to spend Christmas with his long widowed mother Kate Spencer and his army soldier brother Aiden Spencer, hard working and talented Manhattan lawyer Hugo Spencer, facing his regular year end review, issues an ultimatum to his boss, George Vogel, for a position as partner in the new year, he looking for a job elsewhere otherwise, such forthrightness about himself unusual for Hugo. Vogel admits that the thought of Hugo being partner at this time had not yet passed his or the other partners' minds, something that they will have to ponder over the Christmas break. In Milwaukee, Hugo finds that his mother, as is her usual nature, has assigned them all 24/7 tasks, this time associated with her role of the Carroll Avenue Neighborhood Association President in organizing the annual Christmas Eve Festival at the historic Carroll Avenue Train Station, this the last year in this role for her not only in giving up the Presidency, but that the town planning commission has overridden the historic society in planning to demolish the train station building in the new year. In the process, Hugo reconnects with Patrick Ryan, two years ahead of him in high school, and the most popular person in his class in spite of being already out, something that Hugo did not do himself until after high school. Despite his young age, Patrick has already retired as a former Silicon Valley app developer, he finding his place being home in Milwaukee doing philanthropic work. Believing Patrick out of his league, Hugo is surprised to find that Patrick seems to want to spend time with him, that only fostered by Kate. While feelings do develop between Hugo and Patrick, Hugo, less assured of himself than Patrick, doesn't know what to do with what is happening between the two of them in light of he heading back to New York right after Christmas. Working on the festival, discovering some unfinished business at Kate's home, researching the issue or the train station which he has always loved, getting some advice from Aiden about his own unexpected Christmas romance, and learning what Vogel and the other partners have decided about his fate at the firm will all factor into whether Hugo believes there is a potential future for him and Patrick. —Huggo