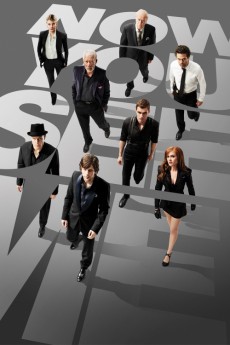 Caitriona Balfe, Morgan Freeman, Mark Ruffalo, Woody Harrelson
Small-time magicians Daniel Atlas, Merritt McKinney, Henley Reeves, and Jack Wilder are invited to attend a meeting in a weird apartment. One year later, they reappear as The Four Horsemen in a show in Las Vegas sponsored by the millionaire Arthur Tressler, and they heist a bank in Paris from the stage, and distribute the money to the audience. F.B.I. Agent Dylan Rhodes is assigned to the case and Interpol sends agent Alma Dray to be his partner. Dylan and Alma are completely lost in the investigation, and exposer of illusionists Thaddeus Bradley gives hints about illusion. When the Four Horsemen steal the bank account of Arthur Tressler during a show in New Orleans, Dylan and Alma believe that these heists are only a distraction for a huge scheme, but they are never sure about of what is true, and what is illusion.