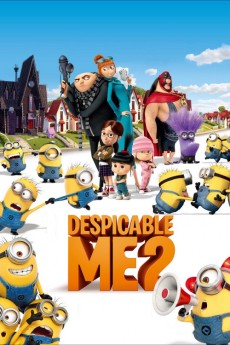 Nasim Pedrad, Vanessa Bayer, Steve Carell, Kristen Wiig
While Gru, the ex-supervillain is adjusting to family life and an attempted honest living in the jam business, a secret Arctic laboratory is stolen. The Anti-Villain League decides it needs an insider's help and recruits Gru in the investigation. Together with the eccentric AVL agent, Lucy Wilde, Gru concludes that his prime suspect is the presumed dead supervillain, El Macho, whose his teenage son is also making the moves on his eldest daughter, Margo. Seemingly blinded by his overprotectiveness of his children and his growing mutual attraction to Lucy, Gru seems on the wrong track even as his minions are being quietly kidnapped en masse for some malevolent purpose.