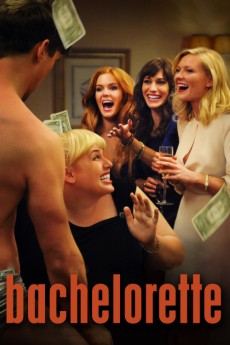 Rebel Wilson, Adam Scott, Lizzy Caplan, Kirsten Dunst
Party girls and friends as a foursome since high school in New York City, class of '99, Regan, Gena and Katie largely kept Becky, the overweight one with eating issues, around to make themselves feel better about themselves. So when Becky announces to Regan that her nice, handsome boyfriend Dale has proposed and that she wants Regan to be her maid of honor with Gena and Katie also in the wedding party, A-type Regan, the de facto leader of the four, is outwardly happy, but internally angry in believing that any of the other three, most specifically her, deserved to be the first, especially to a nice guy like Dale. Los Angeles residing Gena, whose reckless life choices are largely an outcome of "the incident" with her high school boyfriend Clyde, the two having broken up on bad terms because of it, decides to attend the wedding only in learning Clyde will also be there, Gena who plans to flaunt herself with other men in front of him. The four convene for the first time the evening before the morning wedding for both the rehearsal dinner and what Becky wants as the rather staid bachelorette party following, Katie, the underachieving one as a Gap sales clerk and who largely just sees this event as another party, having a surprise to liven up the proceedings. The three by themselves in their hotel suite at the end of the rather early evening, Regan, Gena and Katie accidentally ruin Becky's wedding dress seemingly beyond repair. While still feeling rather emotionally detached from the proceedings of the wedding, they still don't want to ruin Becky's day, they needing to have a completed solution for the dress by first thing in the morning. Their quest for a presentable wedding dress is affected by them having to deal with men in the wedding party: Trevor, the best man, is looking for a "wedding" sex partner among the attendees, Regan the one he has set his sights on; in Clyde being an obvious person who could help with the dress, Gena needs to deal with their unresolved issues in spending time with him; and "plain" Joe, another high school classmate, who has always had a crush on Katie, who in turn doesn't even really remember him, has that renewed feeling for her.