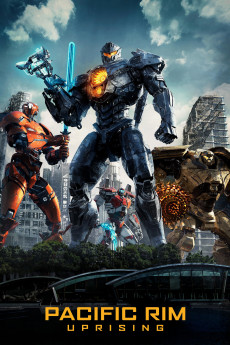 Scott Eastwood, Adria Arjona, Charlie Day, Burn Gorman
It is 2035, ten years after the Battle of the Breach, in which the inter-dimensional portal created by the Precursors (through which they sent marauding Kaiju) was closed. Former Jaeger pilot Jake Pentecost - son of Battle of the Breach hero Stacker Pentecost - makes a living by stealing and selling Jaeger parts on the black market in the Los Angeles area. After he tracks part of a disabled Jaeger's power core to the secret workshop of fifteen year-old Jaeger enthusiast Amara Namani, both are arrested by the Pan-Pacific Defense Corps (PPDC) after an altercation between Amara's small, single-pilot Jaeger Scrapper and the Police Jaeger November Ajax. A holographic transmission of Jake's adoptive sister and PPDC Secretary General Mako Mori persuades him to return to PPDC as an instructor, with Amara as his recruit..