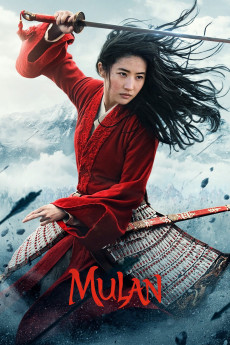 Ming-Na Wen, Donnie Yen, Utkarsh Ambudkar, Jet Li
In Imperial China, Hua Mulan is an adventurous and active girl, to the disappointment of her parents, who hopes that one day she will be wed to a good husband. As a young woman, Mulan is forced to meet with a matchmaker to demonstrate her fitness as a future wife. Mulan, flustered, attempts to pour tea in front of the matchmaker, but a spider causes a panic that destroys the kettle, and the matchmaker calls her a disgrace in front of her family.To the north, an imperial outpost is invaded by Rouran warriors, under the leadership of Böri Khan. They are assisted by the witch Xianniang, who uses her magic to pose as a surviving soldier and report the attack to the Emperor of China; he then issues a conscription decree ordering every family to contribute one man to fight Khan's forces.Imperial soldiers arrive in Mulan's village to enlist recruits and her elderly and frail father Hua Zhou is forced to pledge his service as he has no sons. Realizing that her father has no chance of survival, Mulan flees with his armor, horse, and sword to join in his place. Mulan arrives at the training camp, which is run by Commander Tung, an old comrade of Hua Zhou. Alongside dozens of other inexperienced recruits, she ultimately becomes a trained soldier under his tutelage without exposing her true identity.The Khan's army continues to advance, forcing Tung to end training early and send his battalion to fight. Mulan chases some troops on her own, but is confronted by Xianniang, who mocks her for pretending to be a man. She attempts to kill Mulan, but her attacks are stopped by the leather with which Mulan's chest had been bound to hide her identity. Mulan removes her male disguise, returning to the battle just as the Rourans begin attacking her fellow troops with a trebuchet. Mulan uses discarded helmets and her archery skills to maneuver the trebuchet into firing on a snowy mountain, triggering an avalanche that buries the Rourans.Mulan rides back to camp and rescues Chen Honghui, a soldier she befriended in camp. Unable to hide her true gender any longer, she is expelled from the army and begins her return home. On her way, she is confronted by Xianniang, who reveals that she was also shunned by her people and fights for Böri Khan only because he treats her as an equal and that no one else does. Additionally, she reveals that the attacks on the outposts have been a diversion, as Khan's true plan is to capture and execute the Emperor for having his father killed. Risking execution, Mulan returns to her battalion to warn them of the impending capture. Tung decides to believe her, and allows her to lead a unit to the Emperor's palace.Xianniang uses her magic to be in the image of the Imperial Chancellor and persuades the Emperor to accept Böri Khan's challenge to single combat, while removing the city guards from their posts. The guards are murdered, and the Rourans prepare to burn the Emperor alive. Mulan's unit distracts the Rourans while Mulan goes to save the Emperor. Khan tries to snipe her with an arrow, but Xianniang, sympathetic to Mulan and disenchanted from Khan, transforms into a bird and sacrifices herself by intercepting the arrow. Mulan kills Khan, but not before he disarms her and destroys her father's sword. She frees the Emperor, who offers to let her join his personal guard. She declines the offer and returns to her village.Mulan is reunited with her family. An emissary from the Emperor, under the leadership of Commander Tung, arrives to present Mulan with a new sword, while making a personal request that she join the Emperor's Guard