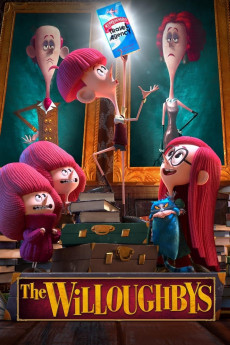 Martin Short, Maya Rudolph, Ricky Gervais, Will Forte
After the four children are kicked out of their home by their parents, the children are desperate to find new parents and think of a plan to 'orphan themselves' by sending their parents to a deadly vacation so that they can die. They see a travel agency after wandering homeless in the streets of a busy city, and Tim says, 'We can send them away. What if we orphaned ourselves?" They then sneak back into their home (still kicked out) without their parents' knowledge, and Tim states, "We shall craft a murderous adventure." He then states, "A romantic getaway, hiding deadly orphaning opportunities. If they do melt in the hottest place on earth ( a scene is shown of the parents melting in lava)...they shall drown in the wettest (two sharks are shown eating the parents who are in a boat)...Cannibals will feast unless they freeze in glacial ice (a scene is shown where parents are being boiled in a large pot while cannibals dance around the fire with a knife in hand, then it shows them freezing in a glacier)...or dissolve in fields of acid (parents are shown as their skin dissolves due to the acid)...they shall not escape the bears (two large bears being aggressive)...we have saved the deadliest spot for last, the alp." Then Jane points to a picture of the alps and says, "He who goes up does not come down." After this point, the kids are on a race to get orphaned so they no longer have to deal with their unloving and selfish parents.