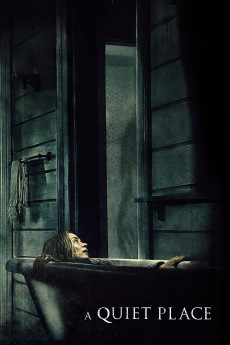 John Krasinski, Emily Blunt, Noah Jupe, Millicent Simmonds
The story of the young Abbott family is told starting on day eighty-nine of their ordeal. Unaware if anyone else on Earth is still alive besides them, they have to remain as silent as possible under most circumstances, which means no speaking, to evade deadly and seemingly indestructible armored creatures which track their targets solely by sound and which have led to the Abbotts' solitary existence. This existence is made all the more difficult for eldest offspring Regan in being deaf and thus unable to gauge the issue of sound, which is why father, Lee, is constantly trying to devise ways to upgrade her cochlear implant if only for her survival. Under these circumstances, the family tries as best it can to lead as normal a life as possible with devised safeguards to protect them despite anything that may happen to them potentially to throw them off this routine of mock normalcy and survival. Through this ordeal, they also try to learn as much as they can about the creatures in the hope of someday being able to destroy them to regain their lives. For parents Lee and Evelyn, the first priority is protecting the children at all cost, which the children may not always see or understand especially concerning the day eighty-nine incident.