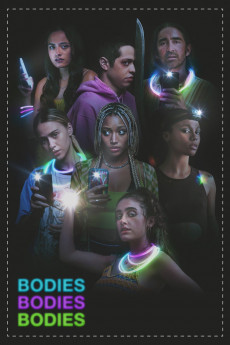 Lee Pace, Rachel Sennott, Pete Davidson, Myha'la Herrold
Nervous about meeting the smug, wealthy friends of her rehabilitated girlfriend Sophie, timid newcomer Bee arrives late to a booze-addled, drug-fuelled hurricane party at bored David's Georgian grey-stone manor house. As the storm rages outside, the party gets started, and the group of spoiled zoomers gathers around the host in the family mansion's luxurious drawing room to play a compelling, find-the-killer murder mystery game with the lights off. But it's all fun and games until someone loses an eye. And when one of the players ends up dead, mass hysteria takes over, and the petty, narcissistic backstabbers start to turn on each other. Now, cut off from the outside world, their lives depend on figuring out who's behind the frantic outburst of senseless, bloody violence. However, as bitter rivalries flare up and old wounds reopen, how can David's self-absorbed guests survive the night?