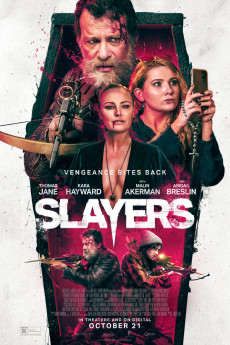 Abigail Breslin, Malin Akerman, Thomas Jane, Kara Hayward
In a world rife with vampires, ace vampire slayer Elliot Jones is on a mission from God: rid humankind of the parasitic bloodsuckers and take his sweet revenge on the fanged beasts that slaughtered his teenage daughter. But the vampires are winning. Now, after endless years of unsuccessful attempts to track them down, Elliot has finally uncovered a secret lair of vampires hidden in plain sight. However, there's a catch--to make them pay in blood, Jones will need all the help he can get. And when a mysterious benefactor lures a group of unsuspecting social media superstars into his impregnable mansion, there's a slim chance that Jones will taste the fruit of vengeance. But has anyone ever taken down an all-powerful vampire leader and lived to tell the tale?