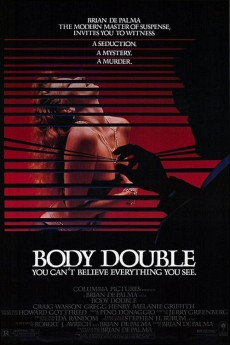 Melanie Griffith, Steven Bauer, Gregg Henry, Rob Paulsen
Los Angeles based actor Jake Scully is having a string of bad luck. He discovers while filming a scene in his current movie, an erotic vampire flick, that he is claustrophobic, debilitatingly so. Despite Jake's determination to work through the phobia not only for this movie but to cope in his everyday life, he is fired by the movie's director Rubin, who cannot afford the delay caused by Jake's issues. Jake also finds out by catching her in the act that his girlfriend Carol is cheating on him, he not even suspecting before that that there was a problem in their relationship. After moving out of Carol's apartment and crashing on his friend's couch for a few days, Jake, in what may be a turn in his fortunes, is offered a house-sitting gig by Sam Bouchard, a fellow actor he recently met. Sam had been sitting at this friend's luxury house in the Hollywood hills, but asks Jake to sit for him during an out-of-town run on a play in which he has been cast. Beyond the luxury of the house itself, it is an easy gig in that Jake can do whatever he wants at the house, his only task to water the plants to make sure they don't die. On top of the ease of the gig, Sam also informs Jake of a bonus in that a beautiful neighbor with long brunette hair across the valley, the interior of whose equally luxurious house can be seen through a telescope, performs a sensuous striptease every night at the same time. During the sit, Jake becomes obsessed with the brunette, first in a romantic sense because of the striptease, then later in a protective sense as he can see that there are some issues in her life. Those issues include a male in her life physically beating her, and a native American seemingly stalking her probably to rob her. Because of this specific voyeur activity, Jake is implicated in a murder investigation. A chance sighting of porn star Holly Body may give Jake some clues as to what happened in the murder, which is only further complicated by his claustrophobia.