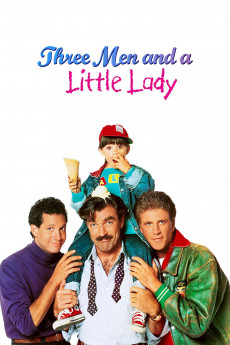 Tom Selleck, Nancy Travis, Ted Danson, Steve Guttenberg
Five happy years after baby Mary's arrival in Three Men and a Baby (1987), the ecstatic single fathers and still-unrepentant bachelors, Peter, Michael, and Jack, find themselves living under the same roof with Mary's British actress mother, Sylvia. However, things will take a turn for the unexpected, when Sylvia decides to move to the United Kingdom, after a promising business proposition combined with a welcome marriage proposal by her director and husband-to-be, Edward. In low spirits, the three fathers travel to bustling London, where one of them discovers that he has deeper feelings for Sylvia and that Edward might have a secret agenda. Will the three men and their little lady let Edward break up their family?