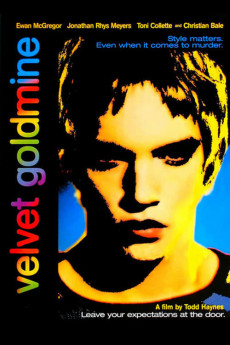 Christian Bale, Ewan McGregor, Jonathan Rhys Meyers, Toni Collette
London, 1971 - Flower Power is on the wane and floundering hippie troubadour Brian Slade feels old-fashioned and out of step until he experiences the raw power of rock musician and exhibitionist Curt Wild at a live concert. Smitten and inspired, Slade rises from the ashes of fussy brocade, reincarnating as the ambiguous pop-rock God/dess of platinum dust and phoenix feathers, Maxwell Demon. His alluring androgynous imagery and the seductive sounds his 'glitter rock' seduce teenagers across the world, offering refuge for the weird and unwanted with the promise of an everything-goes hedonism. At the height of his fame and cultural influence, he plots his sensational demise to escape, alienating his fans and falling into obscurity. On the 10th anniversary of the character assassination, journalist Arthur Stuart investigates Slade's disappearance, forcing him to revisit his own confusing teenage identity crisis and rebirth mirroring that of his idol Brian Slade.