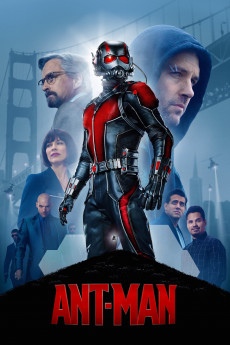 Hayley Atwell, Chris Evans, Sebastian Stan, Paul Rudd
Scott Lang, an engineer who committed a crime he felt that was justified, is sent to prison. When he gets out he wants to be on the straight and narrow for his daughter but having a record doesn't help. And his ex-wife refuses to let him see his daughter because he can't find a regular job. Eventually his friend tells him of a job and he decides to take it. Scott has to break into a vault and when he does all he finds is a weird suit. After he takes it, he puts it on and discovers it shrinks him. Scott tries to return it and when he does he's arrested, a man claiming to be his attorney goes to see him and he tells him that the suit was an opportunity which he should have taken. Later some ants bring him the suit and he puts it on and gets out of jail. He then goes to the man who says he's Hank Pym the man who created the suit. He used it before and called himself Ant-Man. He gave it up when he found out people were planning to use his technology for things he doesn't think is right so he made sure no one could replicate it and put it away. But he now needs Scott to be Ant-Man because it seems like his protégé, Darren Cross, who forced him out of his company, is close to replicating it. So he wants Scott to get into the lab and take it. Scott is uncertain if he can do it and Pym's daughter who thinks she should be the one to go agrees. But Pym thinks Scott is the one. So they train him while trying to make sure Cross doesn't suspect anything.