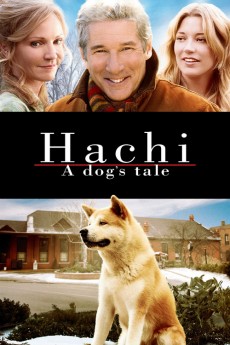 Richard Gere, Jason Alexander, Joan Allen, Sarah Roemer
Eleven year old Robbie is giving an oral class report on the topic of "My Hero", his chosen subject, Hachi, who on the surface is an unusual choice. Several years earlier, Parker Wilson, who lives in Bedridge in suburban New York City, is a college music/performing arts professor, he who makes the train commute to/from the city every working day. It is on one of those routine days going home that he finds at the Bedridge Station a puppy, who he eventually will learn was being shipped somewhere unknown, with the shipping tag lost. He also learns from Ken, a Japanese professor friend, that the dog is a Japanese breed called an Akita, and that the Japanese character on the dog's collar tag is the number eight - "hachi". Parker does whatever he can to find out who the dog belongs to, and although his many acquaintances around the train station do their small part in helping Parker, no one is willing to take the dog, even temporarily. So Parker takes the dog home, despite he and his wife Cate long having dismissed the idea of having a dog. However Parker is able to convince her to let the dog stay temporarily. Eventually on the high probability that they will never find the dog's owner, Cate, upon seeing the interaction between the two, lets Parker permanently keep the dog, who he has since named Hachi. Although living in the Wilson home with Parker, Cate and their daughter Andy, Hachi becomes not a Wilson family pet, not Cate's, not Andy's, but Parker's alone as a special bond forms between the two. Although not a "typical" dog in that Hachi will do not what most dogs do such as fetch, Hachi demonstrates an unwavering and lifelong loyalty to Parker in an unusual way that all around him can see. Robbie chose Hachi as his hero because of this loyalty, despite he never having met Parker, who in nonetheless an important part of his life.