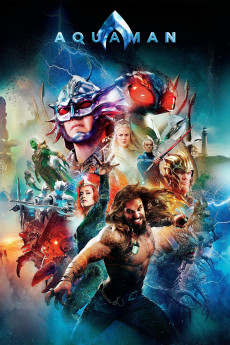 Amber Heard, Nicole Kidman, Jason Momoa, Willem Dafoe
Born to the humble lighthouse keeper, Thomas, and the powerful queen of Atlantis, Atlanna, Arthur Curry reluctantly embarks on a dangerous mission to find his roots. But, with his mother nowhere to be found, Arthur, who thinks he has harnessed his unlimited Atlantean abilities, finds himself on a collision course with his spiteful half-brother, King Orm. More and more, conflict is brewing, as Orm is trying to stir up a violent war with the surface dwellers, and crown himself Master of the Ocean after uniting the seven undersea kingdoms. Now, Arthur, along with his ally, the brave Atlantean Princess, Mera, must follow a faint trail of clues to find the Trident of Atlantis, a magic weapon that belonged to its first ruler, Atlan, and avert a devastating final confrontation between the two realms that would mean the death of billions. Will Arthur embrace his destiny and claim his rightful throne?